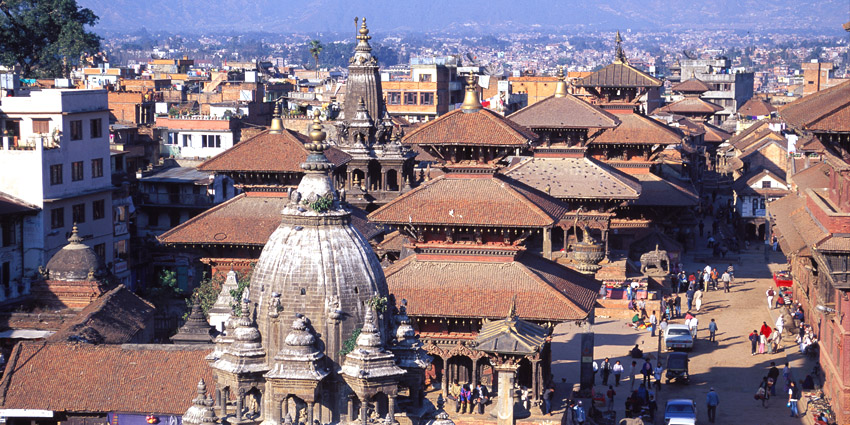 The vast Kathmandu Valley is a treasure house of the World Heritage, such as Patan, Bhaktapur, Changunarayan testifying the depth and the vicissitudes of history. A sounthwestern town, Lumbini, known as the birthplace of Buddha proudly shows you the archeological masterpeices such as Asoka’s stone pillars, Maya goddess made of stone etc.

Day 01 : Kathmandu
Upon arrival, meet- assist & Transfer to Hotel .
PM: Proceed for half day sightseeing of Kathmandu valley, visiting Kathmandu Durbar Square, an old palace complex, Comprising of Hanuman Dhoka Durbar, the old palace Kaasthamandap temple, under which the name Kathmandu is derived. Kumari Temple, the temple of living goddess. The gigantic figure Kal Bhairav etc, hereafter, proceed to the Swayambhunath Temple, a stupa structured Buddhist temple, situated on a hill lock overlooking the Kathmandu Valley. The temple is popularly known as monkey temple (find yourself why is it so called) Overnight at Hotel .

Day 02: Kathmandu (B)
After Early Breakfast, proceed for a sightseeing of Boudhanath Stupa, where it stands with four pair of eyes in the four cardinal direction keeping watch for righteous behavior and human prosperity. Later visit Pashupatinath Temple, one of the holiest Hindu temples dedicated to Lord Shiva setting on the bank of the sacred Bagmati River.
Then proceed to Bhaktapur. Journey takes about 40 mins to reach this historical place, situated at an altitude of 1401m. Bhaktapur covers an area of four square miles. Bhaktapur or the city of Devotees still retains a medieval charm and visitors to this ancient town are treated to myriad wonders of the Malla rulers continues to be reflected at the Durbar Square. Pottery and weaving are its traditional industries. Bhaktapur is famous for woodcarving and the Bhadgaolen topi or cap.
After the Bhaktapur , Drive to Nagarkot, a famous hill resort of Nepal, at an elevation of 1400M above sea level and is hemmed in by forested hills which rise over 2700m high, making them excellent vantage points to view the Himalaya that tow behind them. The panorama of the major peaks of eastern Nepal Himalayas including Mt. Everest can be seen from here. Watch the spectacular sunset over the Himalayas. Then after Drive back to Kathmandu . Overnight at Hotel

Day 03 : Kathmandu (B)
Depart for sightseeing. Visit Patan Durbar square, also known as Lalitpur- the oldest of the three major cities in Buddhist Monuments, Hindu Temples and traditional artisans working with wood, stone and metal. The square is full of ancient palaces, temples and shrines, noted for their exquisite carvings, The Patan Durbar Square consists of three main showks or courtyards, the central Mul chowk, sundari chowk and Keshar Narayan Chowk. The Sundari chowk holds in its center a masterpiece of stone architecture, the Royal Bath called Tushahity. It was listed in the UNESCO World Heritage Monument list in 1979. Afternoon free for Individual activities or Shopping . Overnight at Hotel

Day 04 : Kathmandu – Departure (B)
After Breakfast Transfer to Airport in time for flight for onward destination .